Understanding Plastic Sheeting and its uses 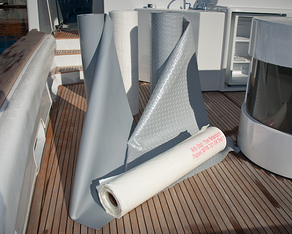 Which is the most flexible of them all?

Linear Low Density Polyethylene (LLDPE) is the most flexible of the plastic sheeting films. LLDPE is blended form of LDPE where the film has much more flexibility, tensile strength, and more conformability. It is more pliable and softer. LLDPE is used for pond liners or blended into other films to give them more flexibility and extra strength. LLDPE is used for films that need a tremendous amount of strength to absorb impacts while not tearing or puncturing. An example of this is a carpet plastic film that adheres to the carpet. It is strong enough to withstand foot traffic, even from stiletto high heels! The molecules all line up and strongly hold together as the film is stretched. The most common thickness range is from 0.5 mil to 40 mil in flexible plastic sheeting.

Which is the most common of them all?

Low Density Polyethylene (LDPE) is the most common type of plastic sheeting. It is very flexible, most often from 0.5 mil thick to about 40 mil in flexible sheeting forms. Due to its flexibility is conforms well to a variety of surfaces. The downside is that this LDPE is not as strong or dense as some other types of plastic sheeting. It is not nearly as puncture resistant either. LDPE is used quite widely in construction, agriculture, surface protection applications, covers of all sorts, tarps and much more.

Which is least commonly used of them all?

Medium Density Polyethylene (MDPE) is the least commonly used form of polyethylene for flexible plastic sheeting. Its positive attributes is that it is stronger than LDPE and has a little more chemical resistant. It has a tighter cell structure making it more tear and puncture resistant. When pond liners are manufactured they are often made with MDPE and blended with LDPE or LLDPE to achieve a strong yet flexible pond liner.

Which is the toughest of them all?

High Density Polyethylene (HDPE, aka HD), has the distinction of being the strongest, toughest, most chemical resistant and least flexible of the four types of flexible plastic sheeting referenced in this article. HDPE is also the most UV resistant- holding up to the harsh rays of the sun without needing UV additive packages. HDPE’s strength comes from its tight cell structure that makes it very difficult for other molecules to pass through its structure on a microscopic level. When applications call for very large liners such as pond liners, HDPE is the most easily seamed or “sewn” together. Used industrially, the thickness range from 12 mils to100 mil thick. HDPE is used as secondary containment liners for oil tanks, and most industrial ponds and canal liners where chemical resistance is needed.