Heat Shrink Wrap that is Anti-Static, Fire Retardant with UVI!

At last we have a heat shrink wrap film that has ultra violet resistance, is fire retardant, and is also anti-static! The "all-in- one"  implication for offering both anti-static and fire retardant characteristics to the film is pronounced. This film is fire certified to the NFPA 701. If you are wrapping equipment that has electrical motors, semi-conductors, or cannot withstand static discharge,  the anti-static property will minimize the chances of a spark. Take the Mars Rover for example..it was wrapped with this proprietary film as pictured below!

Wrapped by the Shrink Wrap Pros!

Heat shrink wrap film is one of the most versitile, useful ways to protect and encapsulate odd shaped objects of all sizes- (like the rocket pictured below from one of GPS's customers).  Heat shrink wrapping is used becasue it offers a containment that is strong, durable, and require little mainenance. 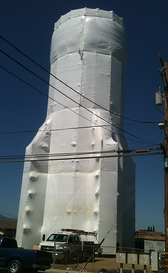 Heat shrink wrap film (often referred to as, shrink wrap film/plastic) is made from virgin polyethylene resin, the most dependable film for the job.  It shrinks when heat is applied, encapsulating the object in a secure manner.  This encapsulation insures that the elements such as wind, rain, snow won't have access to the item.

Heat shrink wrap film comes in a variety of thicknesses and colors to better suit the application. The thicker films are more durable for more demanding applications. The thicknesses range from 6 mil, 7 mil, 8 mil, 9 mil, 10 mil, and 12 mil.

There are three standard colors.  White is the most common. It is used for reflecting heat, and does well in all weather conditions.  White is often used for transportation as a cover.  Blue is well suited for areas with snow since it absorbs heat which helps the snow to slide off.  Clear works well when you want to see what is covered since you can see through it.

Heat shrink wrap can also come in a flame/fire retardant version which will quickly extinquish the wrap should it come in contact with flames.  Meeting NFPA 701, the FR heat shrink wrap is popular with  shipyards, scaffolding, factories, or any application that requires the materials to be fire retardant.

.There are hundreds of uses for heat shrink wrap film. Ten of the most pouluar uses are:

In its simplest terms, the main difference between the different types of plastic is the way their cellular structure, or molecules bond with each other, and how tightly they are formed. Beyond that, this incredible polymer allows us to add additives to improve the performance of the plastic.

Which is the most flexible plastic sheeting?

Linear Low Density Polyethylene (LLDPE) is the most flexible of the plastic sheeting films. LLDPE is blended form of LDPE where the film has much more flexibility, tensile strength, and more conformability. It is more pliable and softer. LLDPE is used for pond liners or blended into other films to give them more flexibility and extra strength. LLDPE is used for films that need a tremendous amount of strength to absorb impacts while not tearing or puncturing. An example of this is a carpet plastic film that adheres to the carpet. It is strong enough to withstand foot traffic, even from stiletto high heels! The molecules all line up and strongly hold together as the film is stretched. The most common thickness range is from 0.5 mil to 40 mil in flexible plastic sheeting.

Which is the most common poly sheeting?

Low Density Polyethylene (LDPE) is the most common type of plastic sheeting. It is very flexible, most often from 0.5 mil thick to about 40 mil in flexible sheeting forms. Due to its flexibility is conforms well to a variety of surfaces. The downside is that this LDPE is not as strong or dense as some other types of plastic sheeting. It is not nearly as puncture resistant either. LDPE is used quite widely in construction, agriculture, surface protection applications, covers of all sorts, tarps and much more.

Which is least commonly used of them all?

Medium Density Polyethylene (MDPE) is the least commonly used form of polyethylene for flexible plastic sheeting. Its positive attributes is that it is stronger than LDPE and has a little more chemical resistant. It has a tighter cell structure making it more tear and puncture resistant. When pond liners are manufactured they are often made with MDPE and blended with LDPE or LLDPE to achieve a strong yet flexible pond liner.

Which is the toughest of them all?

High Density Polyethylene (HDPE, aka HD), has the distinction of being the strongest, toughest, most chemical resistant and least flexible of the four types of flexible plastic sheeting referenced in this article. HDPE is also the most UV resistant- holding up to the harsh rays of the sun without needing UV additive packages. HDPE’s strength comes from its tight cell structure that makes it very difficult for other molecules to pass through its structure on a microscopic level. When applications call for very large liners such as pond liners, HDPE is the most easily seamed or “sewn” together. Used industrially, the thickness range from 12 mils to100 mil thick. HDPE is used as secondary containment liners for oil tanks, and most industrial ponds and canal liners where chemical resistance is needed.

What Additives can be added to the plastic?

Anti-static:  An anti-static additive can be added to polyehtylene to make it resist sparking.  Anti-static films are used in the telecommunication industry as one example.  Certain types of equipment can be prone to sparks which could result in a devistating fire.  Anti-static fire retardant films solve this problem.

UV Stabilizers:  Sunlight eats up plastic.  Perhaps you have seen black plastic on piles of dirt that are flapping in the wind? That is because that torn plastic didn't have any UV stabilizers to combat the strong rays of the sun. Heavy duty plastic sheeting adds these stabilizers for films that will be used for ponds, covering anything outdoors, exposed to sun light.

Color/Pigment:  It's no surprise that pigment can be added to polyethylene to make the plastic look a certain color.  Just about any color can be created.

Flame/Fire Retardant:  Plastic goes up in a flash if it is exposed to an open flame.  Today there are fire retardant films that when exposed to a flame will not add to the fire. They will self extinguish.  Note that the plastic may melt, but it won't be a fuel souce to the fire.

Sip/Anti-block agents:  This additive is used to improve film to film slipping.