Break out the Bubbly? With SolaWrap you will be toasting to your successful greenhouse!

SolaWrap guarantees an even light diffusion over the entire greenhouse.  83% of sunlight diffuses through more than 100 air burls (bubbles) per square foot.  30% is healthy infrared light.  This even diffusion spreads evenly thus avoiding shading and burning areas.  The results are faster growing, healthy plants.

SolaWrap has a 10-year warranty (read here) against UV degradation. For over 40 years, this product has not deteriorated, changed color, become foggy or streaky. Used as greenhouse roofing or walls, SolaWrap is waterproof, and airtight. It has withstood hailstorms, snowstorms, hurricane winds and both hot and cold snaps. Customers report picking strawberries inside the balmy greenhouse, while the temperatures outside are negative 30 degrees Celsius.  This same greenhouse withstood snows, 70 mile-per-hour winds and violent hailstorms. Bottom line is, this greenhouse plastic is S T R O N G!

Please visit our Facebook page for more pictures and videos.

Installation: Solawrap is a flexible polyethylene greenhouse plastic that is easily installed! You may cut it with a knife or scissors, and is completely recyclable and can be safely incinerated. Our patent pending slide and lock technology is quick, safe and easy to use.

Super fast install. 2 mins per roof section. Notice they are not on the roof. It is extremely safe! 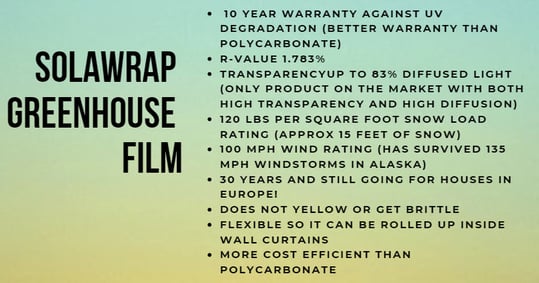 SolaWrap extends your growing season and peace of mind because it is the "One and Done" film!

SolaWrap greenhouse  film (with bubbles) is a revolutionary polyethylene film that saves energy, offers UV protection, durability with transparency and extends the growing season. The unique bubble design is what allows SolaWrap the capability to allow for year-round production at a fraction of the cost of traditional greenhouse films. Known in Europe as LP Keder or Polydress, SolaWrap is now available in  U. S markets.  It's an insulated film that withstands the most extreme climates.  SolaWrap has a track record for over 40 years of testing in the Swiss Alps, the Middle East, and across Europe. SolaWrap provides an insulating effect that retains up to 95% of heat radiation while providing an R-value of 1.7. This energy savings is significant!

Thanks to its distinctive insulation properties (thermal conductivity value of 3.3 W/sq. m.K), SolaWrap offers a high level of energy efficiency. Its construction principle (air bubbles, keder, profile) prevents any leaks or thermal bridges, so that up to 95% of the heat radiation can be retained. This allows you to save money.

SolaWrap greenhouse plastic guarantees the uniform illumination of the entire horticultural area. At the same time, the air cushion bubbles (1,000 bubbles per sq. m.) ensure a diffuse illumination inside. This prevents the formation of shade and burning glass effects.

Another plus point of the film is its high resilience. Unlike some other films, SolaWrap can withstand the standardized drop weight test without any consequences. Due to its high quality, it can bear high surface loads by sectioning off the roof surface.

SolaWrap represents the highest degree of security for a greenhouse cover. Experience has shown that the horticultural area is well-protected, even in the event of hail, snow or high winds. Even “Lothar”, the storm of the century in 1999, had no adverse effects on the film.

GPS guarantees the 10 year UV stability of SolaWrap at 100 Kly/y. Even under the most severe climatic conditions, no changes in color or clouding will occur, and the film will not weaken in any way.

SolaWrap can be easily cut with a knife or scissors. The low weight of the strips of keder allows for simple installation and simple replacement of old or defective sections. Download Installation Instructions

SolaWrap is a polyethylene film that can be completely recycled in an environmentally-friendly manner or thermally reused in secure fashion.

The differences between SolaWrap and a 6 mil film are significant:

What about a cost saving when growing medical cannabis? According to the INC report..."growing cannabis greenhouse enables almost the same yield at four to six harvests per year, but at a lesser cost. The cultivators reported that cannabis cultivated in the greenhouse can produce a pound of weed at a US$50 (AU$64) cost, when indoor cultivation needs US$300 to US$500 (AU$384 to AU$640) for the same yield."

Click here to see images of SolaWrap up close.

Question: Can SolaWrap be used for Solar dryer houses?

Answer: Yes!  We have already built solar dryer houses for wood, biomass, sludge etc.
What has been done is, SolaWrap was installed in a double layer on the roof and we used black film in-between to collect heat and heat up the air in-between the films. then, the air was continuously cycled to the inside of the house to heat up the unit and dry the product.
You can also use single layer installation and use the sunlight that comes into the house through the transparent film. Most UV light is blocked out. the transmittance increases >350nm so almost no UV light gets inside of your house.